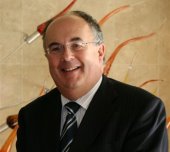 I provide security consultancy on all aspects of security to Commercial, Industrial, Semi State and High Risk Individuals.

With over 30 years experience in the Security Industry I bring a wealth of knowledge and expertise which ensures the highest level of quality in the services provided.

In 2009 I was appointed by the Minister for Justice, Equality and Law Reform Dermot Aherne TD to the Board of the Private Security Authority. I was President of the Irish Security Industry Association (2006 – 2008) which is an elected position by the Members of the ISIA.

Previously I have served as Chairman of the Electronics Division for six years. The Electronics Division looks after Intruder Alarms, CCTV, Access Control and Panic Alarms. As the Industry’s representative on TC 13 of the Electro Technical Council of Ireland (ETCI) I deal with all Irish and European Security Standards, and I represent the Industry on the Advisory Committee for the Intruder Alarm Certification Scheme as operated by the National Standards Authority of Ireland (NSAI).

Links
Get in Touch?